What do you call a brunette in a pool?

Question: What do you call a brunette in a room with many blondes?

Question: Why did the brunette cross the road?

Answer:  No one knows. They were watching the blonde.

Question: How does a brunette turn on the light after love?

Answer: She opens the car door.

“Aladin, find a lamp and give it to his girlfriend.

You are allowed one wish,”

The genie waved his arms & replied, “You now have 1 beautiful house, and all the blondes in the world have two houses.”

Planning her wishes carefully, the brunette said, “For my second wish, give me an amazing man.”

“Okay,” the genie replied, waving his arms. “You now have one gorgeous man, and all the blondes have three.”

Why did the brunette have a bruised belly button?

Because she had a blond boyfriend.

Because they can’t keep their calves together.

Question: What do you call a good looking man with a brunette?

Question: Why are there so few good brunette jokes?

Answer: Because blondes would have to think them up.

What’s black & blue & brown and laying in a ditch?

A brunette who is told too many jokes about blonde

“Has the blonde left yet?”

The hair from a buffalo is butt was more manageable.

Why is the brunette considered an evil color?

When was the last time you saw blondes witch?

Who makes bras for brunettes?

Why are all brunettes have black hair?

It matches their eye browse.

Question: What do you call a brunette girl between two blondes?

Why did the brunette take up jogging?

She wanted to hear heavy breathing.

How does a brunette know dinner is ready?

The smoke alarm goes off. 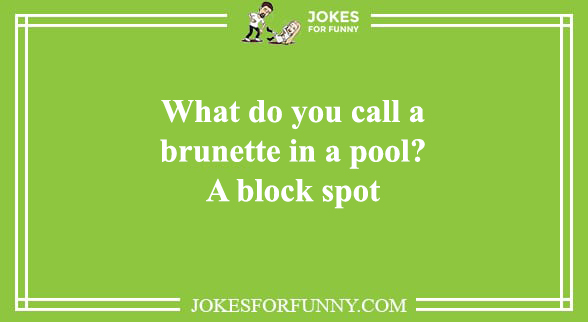 You skip the flat ones.

Why are so many brunette jokes one-liners?

So blondes can remember them.

Why are brunettes, lousy detectives?

They blow every case.

How do you save a brunette from drowning?

Throw her an anchor.

How did the brunette treat her husband like a god?

Every meal was a burnt offering.

What do brunettes say when they pick their nose?

How can you tell the brunette in the cow pasture?

She’s the one without a bell.

ANSWER: Because brunettes aren’t as easy to get into bed.

QUESTION: How is a brunette named in a blonde room?

A brunette sits on the edge of a road and says 81, 81, 81. A blonde goes over there and hears the brunette.

– What does 81 mean? Ask the curious blonde.

“If you sit down on the white streak in the middle of the road,” said the brunette.

– The blonde sits in the center of the road, and a truck comes in speed and throws the blonde a few yards from the edge of the road. 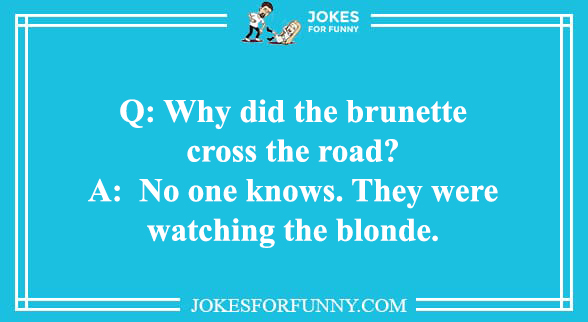 QUESTION: Why are brunettes so proud of hair color?

ANSWER: Because it fits well with the mustache.

A blonde and a brunette sitting on a bench in the park.

“Look at a dead bird,” says the brunette.

-Where? The blonde says, looking in the sky.

-I know, but this is for dry hair, and I have wet hair.

QUESTION: Why do laughing ladies laugh when they hear a blonde bench?

ANSWER: Because I think it does not refer to them.

QUESTION: Why do not the blond men?

ANSWER: The mouth of the brunette.

QUESTION: If a blonde and a brunette jump off a block simultaneously, which gets first down?

QUESTION: Which women are the most faithful? Blonde, brunette, or redhead?

ANSWER: Answer: The old ones?

QUESTION: Why do blondes be short?

ANSWER: To understand their brunettes.

QUESTION: Why did God create the brunettes?

ANSWER: Because ugly men do not feel abandoned

Girls, I’ll tell my husband how many times I’ve cheated on leave. 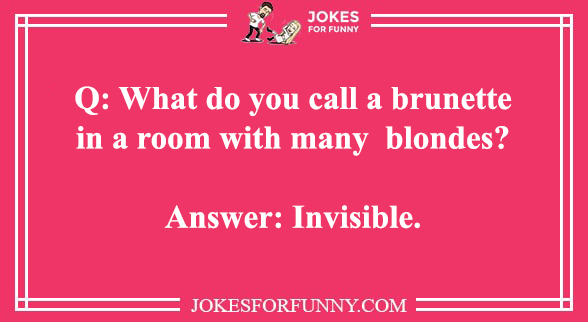 Brunette: What an idiot you are!

What is the connection between UFOs and smart brunettes?

There is much talk about them, but no one has seen them!

There was a blonde and a brunette walking down the street and the brunette said, oh look, a dead bird and the blonde looks up.

A day without a smile is a day lost, so read with your partner or friends things that make you happy.
What is the connection between UFOs and smart brunettes?
There is much talk about them, but no one has seen them!

A brunette walks through the forest and meets the wild wolf, where the wolf says:
– Brunette, let’s play teddy bear!
– How cute! We can play, but how is this game?
-Very easy and simple. You caress me and I murmur with pleasure.

Three brunettes sit under a small umbrella, but all are dry.
-Why?
-Because they didn’t eat.

A brunette tells a friend:
– I went to the gynecologist yesterday.
– And what did he tell you?
– He told me to learn the alphabet better.

Two brunettes are talking:
-I’m going to Stockholm next month.
-Yes, but why are you still going, you were last year.
-Well, yes, but then the streets were full of water.

A brunette’s husband returns from the trip. He gets home, goes into the master bedroom and there he guesses what: he finds a naked guy lying in his bed. Open the closet door and find the brunette wife:- How many times do I tell you not to hide? He must hide.
Two brunettes talk to each other:- Why do you put your child to sleep on top of the dresser?
– He fell out of bed last time and I didn’t hear him.

There were once two brunettes at the entrance to a brewery.
– Do you hear the girl, how many do we take today, three or four?
– We can take two, because yesterday we took three and we have one left.
– Waiter, please 30 beers and 3 bags of salt-free seeds, please.

A very upset brunette enters a hairdresser.
– Who wants a beating?

The whole salon was terrified and didn’t understand what was happening. Finally, after 2 minutes, a 1.80m butt rises, well made and more upset than the brunette.

– Well, I want to.
– Well… go around the corner, because that’s where I got beaten up.

Two brunettes get drunk and leave the club together. At some point I end up on the edge of a river. One of them says:
– Girl, do you want to jump in this pool?

– Yes, I want the girl and hope you see her jump.
It didn’t take 10 seconds for the second brunette to jump and fall on the road, to which she says:
– Alas, but the water in this pool quickly froze!

The brunettes consider themselves smarter than their blonde friends. It is true or not depends on each one of them, but we can say that the jokes about the brunettes and the blondes appear often. They are like two parts of a whole that complete each other.

They describe the naïve and elegant blonde, and on the other hand, the absolute opposite of a brunette. The jokes about them describe spiritual humor. And in general, all the jokes about brunettes contain participants of the opposite gender.

At a meeting after 20 years since graduation, a blonde, a brunette, and a red meet and start bragging. The red says, “My husband gave me a mink fur that costs 20 thousand $”. The brunette says, “Oh, that’s great!”. The blonde says, “I got a Mercedes from my husband on our 30th anniversary”, the brunette says, “Oh, that’s great”.
The other women ask the brunette what did she got from her husband. She says, “My husband sends me to the noble girl’s institute where they taught me how to conjugate the verb “not to drive”.
This is the prayer of a brunette:’ God, please give me the wisdom to understand my husband, love to give him, and forgiveness for him because if you give me strength, I will lead him to his death.