The most famous, but also slightly mischievous, Helen Keller jokes 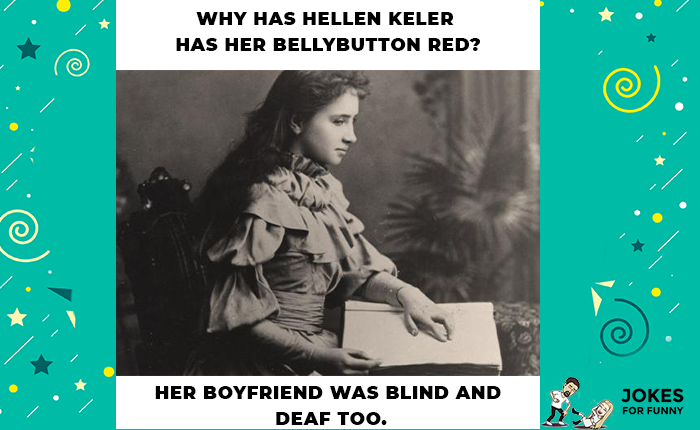 – What did Helen Keller ask Santa for childhood?
-Poliomyelitis! Otherwise, he had all the diseases.

-What were Hellen Kellers’ favorite candies?
-Skittles. Even if he couldn’t see the rainbow, he could at least taste it.

-Why does Helen Keller never change a baby’s diaper?
– He could find it easier after the smell.

-Why was Helen Keller’s leg always wet?
-And her dog was blind.

-Have you heard the latest jokes, Helen Keller?
– No problem, certainly not her.

-Did you know that her parents, to make her no longer upset because of jokes Helen Keller, built a dollhouse in her yard?
– Neither does she. 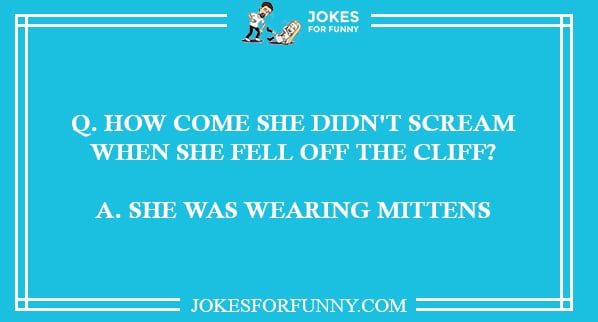 -Why does your husband always yell at her?
-Because you never listen to him.

-Who made the first Helen Keller jokes?
– Her parents, because they were trying to make her laugh.

-How did Helen Keller’s parents punish her?
– They put her in a round room and told her to stand in the corner!

-How did Helen Keller try to kill a bird that disturbed her when she was sleeping?
– He got angry and threw it off the rock behind the house 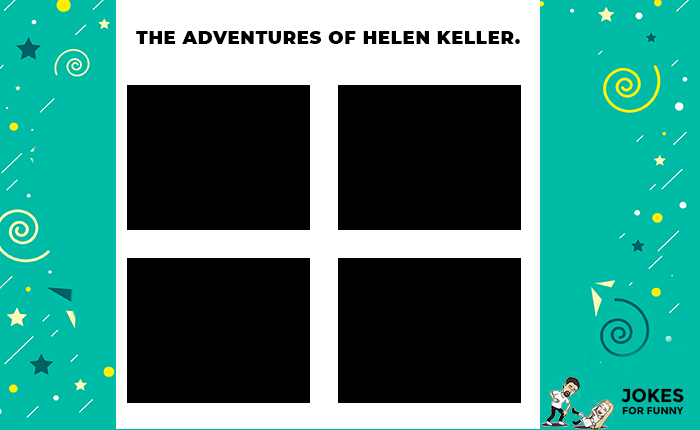 -How did Helen Keller meet her husband?
-A blind date!

– Why is Helen Keller scratching her face?
– She was invited to an official dinner and tried to eat soup with a fork.

– Do you know how many Helen Keller jokes have been invented so far?
– If not, no problem, certainly not her.

-What was her favorite book?
-Around the World in 80 Days.

-What did Helen Keller tell the priest at the last communion?
– Nothing, he didn’t know he was there.

-Did you know that Hellen Keller has a house with many trees planted around it?
-No problem, not her.

-Because it was complicated, how did her parents punish Helen Keller when she was a child?
-They moved the furniture and didn’t announce it.

-What did Hellen Keller call her first child?
-Muuurrghhrrhurrg.

-Why was Helen Keller such a weak driver?
-Because she was a woman.

I asked my wife, “Why can’t Helen Keller drive?”
She immediately replied, “Have you read Helen Keller’s jokes on the net again? It’s logical because she was blind and deaf. ”
“No, you’re wrong, because he died.”

-How do you punish Hellen Keller?
-Lock her in a round room and tell her there’s a penny in the corner.

-What is the name of a tennis match between Helen Keller and Stevie Wonder?
-Endless Love.

-How do you keep Helen Keller a secret?
-You break his fingers.

-How did Helen Keller meet her husband?
-On a blind date.

Do you know that she sings? 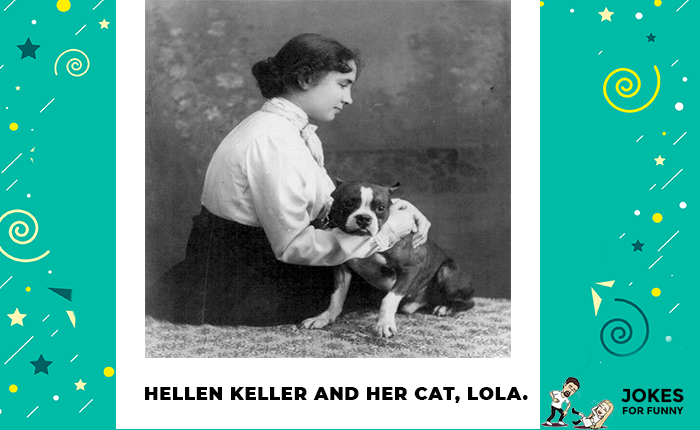 -What did Hellen Keller say when she found the cheese grater?
It was the most violent book he ever read, even harder than some Helen Keller jokes.

-Why is Helen Keller playing the piano with one hand?
-Use the other to sing with his voice.

-What was the worst day of Hellen Keller’s life?
-On the day he burned his tongue and hands with hot coffee and could not speak anything.

-Is it true that Helen Keller managed to get her driver’s license?
-Obviously, she could do anything.
-But how did Hellen Keller drive a car?
-Easier than you think, with one hand on the steering wheel and one hand on the road.

It is known that Helen Keller was a great animal lover. From here, the opportunity for many Helen Keller jokes.
-What did Helen Keller call her favorite dog?
-Dodger 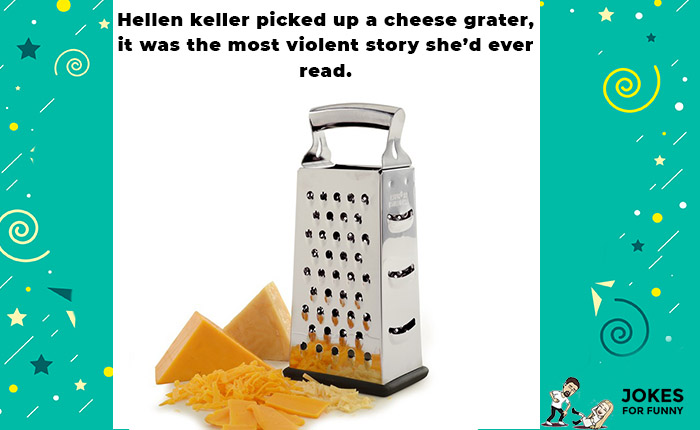 -How did her parents punish Helen Keller for breaking all the teacups in the house?
-They walked on her Braille cards while wearing golf shoes.

-Why did Helen Keller go crazy?
-He tried to decipher the message that was written on a scraper.

-How are you telling Helen Keller not to tell anyone your secret?
– He broke his fingers.

-What was her favorite color?
-Black, definitely.

– What brings her out of mind more than some Helen Keller jokes?
– Rearranging the furniture in the living room.

-How did the parents punish Helen Keller for insulting her?
– They took her to the bathroom and washed her hands with soap.

– How did Helen Keller’s parents punish her for being rude?
– They gave him a basket of fluff and told him to “read this book” aloud.

– How did the parents punish Helen Keller?
– They decided to remodel the living room, and they changed the furniture.

– Why is Hellen Keller’s child blind?
– Because he was ambitious to handle himself and always fed him with a fork!

– How did Helen Keller try to kill a bird that disturbed her when she was sleeping?
– He got angry and threw it off the rock behind the house.

– How did Hellen Keller meet her husband?
– A meeting on the unseen!

-What were Helen Keller’s last words to the priest at the last communion?
– Nothing, because he didn’t know he was there.

-Why did Hellen Keller go crazy?
-He was bored at home, so he tried to decipher the message written on a scraper.

-How do you make Helen Keller not tell anyone your secret?
– He broke his fingers.

-What was her favorite color?
-Black, definitely. 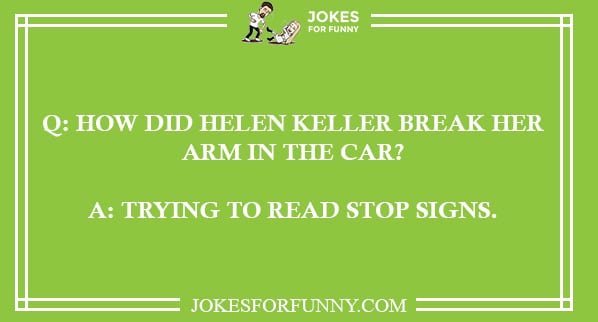 – What brings Helen Keller to mind, more than I’m kidding here?
– Remodeling of furniture in the living room.

-How did parents punish Helen Keller for insulting her?
– They took her to the bathroom and washed her hands with soap.

Helen Adams Keller was one of the most famous American authors and political activists, born on June 27, 1880, in Tuscumbia, Alabama, USA. She is best known as the first deafblind person to earn a bachelor’s degree.

She had many obstacles to overcome, but this did not stop her from pursuing her dream. Throughout his remarkable life, Keller is the best example of the fact that anyone can overcome difficulties through determination, work, and imagination. Her unwavering perseverance with which she has exceeded her limits makes her known as a respected and world-famous activist who militates for the good of others.

Although her merits are recognized, people’s habit of making fun of everything did not bypass her either, so today, we have many Helen Keller jokes. We also tried to select the most successful jokes with Helen Keller, which we hope will make you laugh out loud because sometimes, you even feel the need to forget a little about your daily worries.

Helen Keller was an American writer, is known especially for being the first deafblind person to graduate from college. She managed to create her own form of communication, she learned to do without others’ help, and her ambition was so great that she wanted to attend college too. But Americans have made many Helen Keller jokes, and few are the ones who prefer them. We also have a selection of the best Helen Keller jokes, which you can read below.

Hellen Keller was an American writer, especially for being the first deafblind person to graduate from college. Although she was born perfectly healthy, following a febrile episode at the birth of two years, she remains with hearing and visual disabilities. With time he manages to create his own form of communication, he learned to do without others’ help, and his ambition was so great that he wanted to attend college.