Chuck Norris does not sleep. He waits.

Chuck Norris is currently suing BBC, claiming that they don’t tell the truth about his adventures.

The chief export of Chuck Norris is pain. 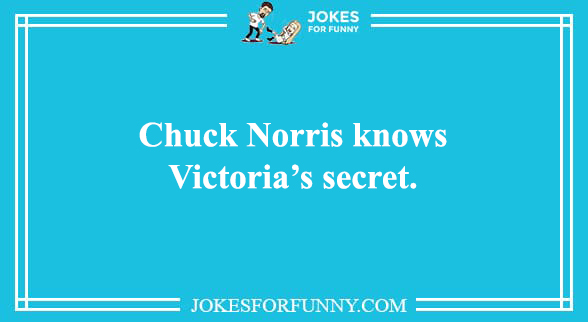 If you can find Chuck Norris, you may be only seconds away from the hit you.

Chuck Norris doesn’t wash his pants. He just rinses them.

Chuck Norris is 1/8th Cherokee. This has nothing to do with ancestry. The man ate an Indian.

There is no chin behind Chuck Norris’ beard. There is only another fist.

The Biggest Wall in the world was originally created to keep Chuck Norris outside.

If you say to Chuck Norris what time it is, he always says, “One moment until.” And after you ask, “Two seconds until what?” he hit you.

Chuck Norris once ate three 42 oz. Steaks in one hour. He spent the first 25 minutes having sex.

Chuck Norris doesn’t churn butter. He loves sheep and fresh milk to them.

When Chuck Norris pays taxes, he sends blank forms and includes only a picture of his person.

The quickest way to a knock out a man is with Chuck Norris’ fist.

Chuck Norris will attain statehood in 2020 after his flower is the Mesopotamia.

Nagasaki never had a bomb dropped on it. Chuck Norris arrived. They are and create a huge implosion.

Chuck Norris once shot down a French fighter plane with his finger and say “Ohhh!”

Why Chuck Norris is blonde? Because his mother also was! Read more blonde jokes.

Chuck Noris is so strong that when it rains, the water drops away from him.

Legend has it that Chuck Noris went into the jungle without even a weapon, and when a lion jumped on him, he broke his teeth and left.

Chuck Noris entered the ocean and reached the deepest because the water split in two and made it a corridor.

In 2009 Chuck Norris  published a book based on memes about himself. “The official book of jokes about Chuck Norris” combines jokes invented by the internet users from the real events of his biography. 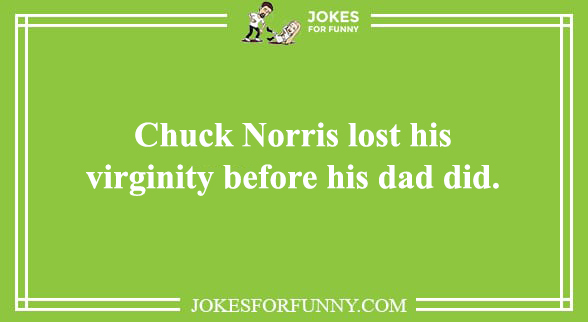 It has been proved that Chuck’s attitude regarding people’s memory can’t be called calm or ironic because, after all, he got not only extraordinary popularity but also a consistent remuneration.

When there are made jokes about Chuck Norris, there is actually practiced wisdom, as the actor says. He also says that he has nothing against good humor and that he often enters on the internet and reads jokes about himself.

One of his favorite jokes is, “Chuck Norris was bitten by a cobra. After two days of terrible suffering, the cobra died.”. Besides this, another favorite joke is one invented by his son “Chuck Norris uses to eat bullets at breakfast, so be careful when you go to the bathroom after him.” 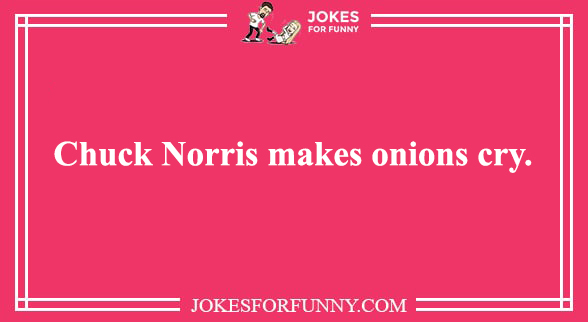 In an interview, Chuck Norris was asked if he practices karate or is a master of the sport. “Well… yeah…” Was the reply of the actor. Then the interviewer asked what kind of belt she should wear to take his money. He answered, “black… with black tights and a mini skirt.” Thanks to these jokes, many people learned about the less seen side of the actor.