Pirates are loved by all, and movies and cartoons with them each time gather many views, and one of the best pirates jokes is the following.

I heard it from a friend and I want to tell you:

“Two pirates were aboard and were discussing a glass of rum. One of them had a hook instead of a hand, a wooden foot, and a glass eye. The other being more curious, asks the other:

– Tell her friend, where did you lose your leg?

– Well, one day, I fell once overboard, and until my boys pulled me out of the water, a big bad rap appeared and left me without afoot.

– Yes, with this hook in your hand?

– An enemy cut my hand with a sword in a battle.

– And how did you lose my dear friend?

– I was watching after a bird that flew over the ship and it did an s..t on my face.

– And how did you lose your eye from a bird s…t?

Pirates can be creepy, funny, fantastic, spectacular, and super dumb because many jokes have appeared.

Because they have very good arrrrguments.

2. Why is it so hard for pirates to learn to read?

A: Nothing, it just waved.

4. Q: What’s the difference between pirates?

5. Q: What does a Dyslexic Pirate Say?

6. How do pirates communicate with each other?

With an Aye phone.

7. What were the pirate’s words when he blew out the candles on his 80th birthday cake?

8. What is regularly given to the sea around 8 am if the digestion is right?

9. How do pirates know that they are pirates?

They think so. Therefore they are.

10. What is a pirate’s favorite movie?

Booty and the Beast. (But it is arr-rated.)

Because they’re not very strong in the ‘Arrrr!’ department.

A: They say once ye lose yer first hand, ye get hooked!

To arr is seriously pirate.

14. Why are pirates such eager readers of the Playboy?

Because of the articles.

The puns are extremely exciting. If you have a sense of humor developed and you like pirates, puns with pirates will be exactly what you are looking for.

Pirates are an extraordinary source of inspiration. On the internet, you’ll find plenty of jokes, pick up lines and puns with them. Famous, full of personality, and extremely popular, pirates will always be loved by the general public.

We invite you to our site to discover pirate puns and amuse you with your friends.

A pirate ship anchors on an island and the pirate asks locals:

– Are there sharks around here?

The pirates enter the water to relax and suddenly feel a presence near their feet.

– Sir, you said there are no sharks in the water.

– Well, no sharks are scared of crocodiles.

A pirate anchors with his crew and goes to eat at a local.

The pirate boss orders a chicken soup. Take a mouth and he says:

– You tell the waiter, what is the name of this water on my plate?

– Look, wonder! I sailed for 30 years in the soup without knowing what to say. 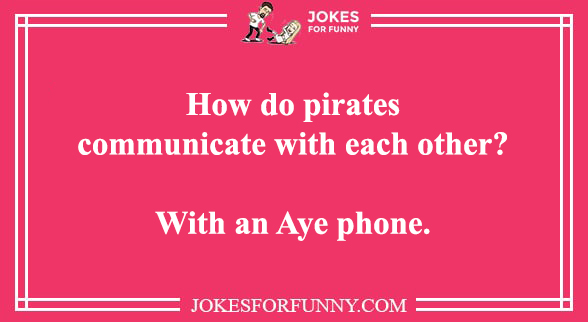 For those who love to laugh, a few pirates jokes are a good opportunity. If you don’t know any, no problem, we have for you pirates puns that will make you laugh with tears, and which you can then tell others.

An old pirate sits in the port of Marseille and drinks, no longer standing. A passerby tries to talk to him:
-Do you know that more than 10,000 French people die every year from drinking ?!
-I do not care! Your job! I am Russian…

The wife of a former pirate captain tells her best friend that she managed to convince her man to keep his diet for as long as he was at home. After a few weeks, the friend asks:
-How’s your husband going? Did he manage to lose weight?
-Binenteles! Do you know his tattoo, which he had on his chest, representing a ship with three blades? Well, now it has become a boat ride on the Danube! 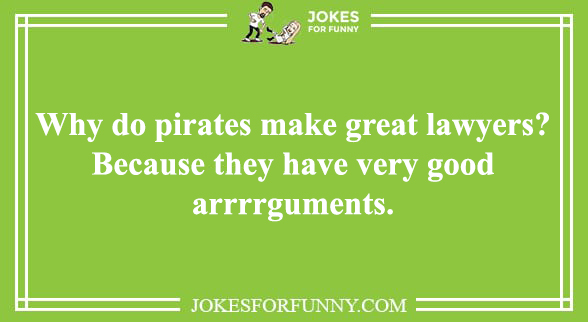 The Pirate Captain yells, creepy:
-No one has an eye? Because I see that on that strip of land in front of us you can see a group of people!
– I see, Captain! I have good eyes. There are four sailors and a crew chief digging.
-Bravo. But where do you know he’s a crew chief?
– He’s one who doesn’t dig, Captain!

A pirate goes to the captain:
– Captain, we have a blind crew member on board. What to do with it?
– Throw it immediately over the board!
After 10 minutes, the pirate returns:
-Captain! What to do with his dog? 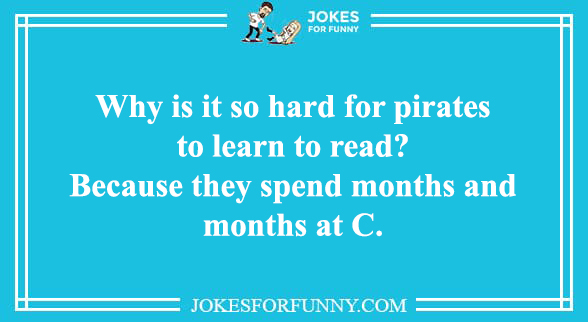 A ship captain receives news from his second that a pirate ship is coming to them.

The captain tells a sailor to bring him a redshirt. The captain was asked:

– What do you need the red shirt, sir?

“When you bleed, I want you not to see me and to discourage you,” said the captain.

Going by sea, a ship gets to be surrounded by 50 pirate ships.

Before the fight began, the captain shouted:

– Get me my brown pants right away!