Have we made a great discovery in science?

The reporters ask curiously: What?

What is the difference between science and believe?

You have to believe in science to prove something.

What is the best discovery in science in the last decade?

A scientist tells a joke to his colleague:

Do you know what is smaller than an atom?

What is the best joke that a scientist will say?

Do you want more science jokes? Send us your ideas today!

Science can surprise us with amazing discoveries, but also through the strange and funny things, it can tell us. Physicists from the American Physics Society have discovered after research that you can heat a cup of coffee if you yell at it.

Because we are studying fun studies, the Japanese researchers have calculated that to arrive in space with an elevator, it takes 8 days. So, if you do not want to leave with the rocket in space, you can take a lift, and in 8 days, you will reach your destination.

Another extraordinary thing that researchers have discovered is that sheep can remember the faces of other sheep. They can remember up to 50 other sheep’s faces. Although they are capable of holding other girls’ faces, they cannot hold human faces.

Q: How do astronomers organize a party?
A: The planet.

A: Because they make up everything.

3. I just read a book about Helium. It was so good that I can not put it down.

4. What do clouds do when they become rich? They make it rain!

Molecule 2: Are you sure?

6. Q: Why are Curium, Helium, and Barium the medical elements?

A: Because if you can’t heal with this.

A: Because they have mass.

8. A photon walks into a hotel. The desk clerk says, “Welcome to our hotel. Can we help you with your luggage?”

A: “You think you’re always right!”

10. Two hydrogen atoms walk into a bar. The first says to the second, “I think I’ve lost an electron.” The second replies, “Are you sure?” to which the first retorts, “Yes, I’m positive.”

11. When you die, you should have your brain donated to science.

12. Two hydrogen atoms are at a party and bump into each other. The first one says, “Hey, grab that electron, it’s mine!” “How do you know?” asks the second. “‘Cause I’m positive!” the first replies.

13. Why are conspiracy theories are like moon landings? Because they’re all fake. 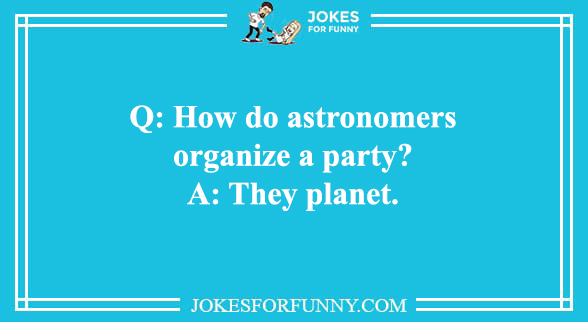 A computer knows only 1 and 0, so we are smarter?

I once saw something like this written on paper: “The theory is when you know it works, but this doesn’t happen. The practice is when it works, but you don’t know why. In physics theory and practice combine: nothing works, and nobody doesn’t know why. ”

Where it’s the store you data?

Above a gas bulb is a plate. The teacher asks, “Why is the hot plate on the opposite side of the flame?” One student responds: “Hmm, because the board is heat conductive?” Teacher: “No. Because I just turned it on the other side.” 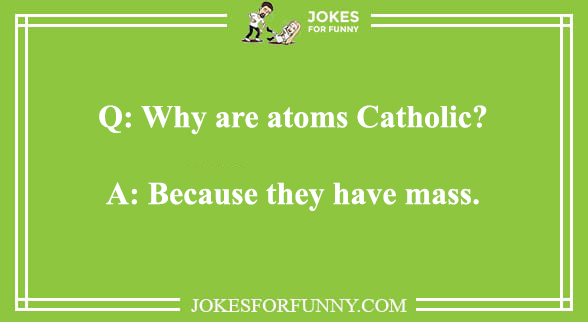 Astronomer # 1: “… so the police stop me and ask me if I realize that I have passed the red one. I told him that I did not see the traffic light as red because he was moving to blue as I was approaching him. it was bigger. ”

Astronomer # 1: “No, he gave me a fine for exceeding the legal speed.” 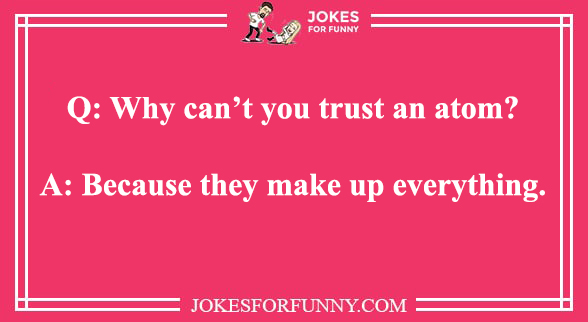 Mathematicians are just like the French: everything you say translates into their language. The result is very different from the original.