How a skeleton dance?

Yes, if he can look at you.

How you recognize a skeleton?

It was so slim. It looks like he doesn’t eat. OK, maybe one time per week.

Why are skeletons white?

Because all we are white inside.

How do you recognize a real skeleton?

By making skeleton jokes around your friends

A group of skeleton rise from the cemetery. What is the first thing that they do? They go to drink!

Do you want more jokes about the skeleton? Write your own jokes and send us.

Three skeletons were walking down the street. They ask each other? “When did you die?” “Hey, you answer the skeleton with ’65’.

A skeleton enters into a bar and starts to make jokes.

All people from the bar start to cry because they are scared!

What is the favorite plant of a skeleton? A GOOD tree-go. But if they don’t like one, what about an S-pin?

What happens when a skeleton doesn’t laugh at you being stung?
It looks like some funny bones are broken.

A skeleton in a bar: Waiter, please bring me a beer and a mop!

A skeleton goes to the doctor for a consultation.

Two skeletons lost in the desert ran when, at one point, one says:

– I did muscle fever!

Skeleton jokes, to laugh with your friends 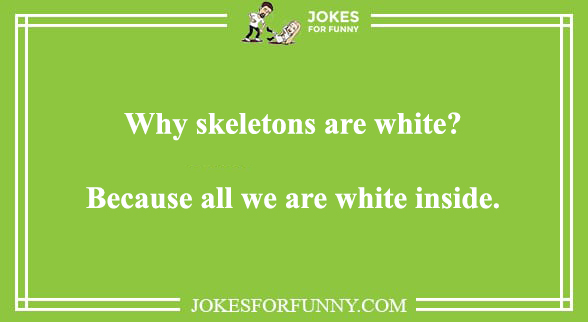 There is nothing that can not be used as a source of inspiration for a good joke. Even death is often laughed at, and the chapter of “skeleton jokes” seems inexhaustible. We have a selection of the most popular skeleton jokes below. Do you know others that can enter the category “skeleton jokes?”

About 3 skeletons were walking down the street. One asks the other?
-When did you die?
– Hey, answers the skeleton, I have some time, through ’65.
-Yes, you can see, you still look good, look how strong bones, how much calcium you have, eat well through ’65
-But when did you die?
-From ’93.

-You know, and you look good, you really don’t look bad at all. I think you had good food back then.
-But you? The other two ask the third. When did you die?
-What, did you go crazy? I didn’t die! I am a student, I go to college, I have two arrears!

For Halloween, a skeleton wants to make a good joke and goes to a well-known doctor. The indignant doctor yelled at him: “Is he coming now?”

Five skeletons in a cemetery, playing poker. Suddenly, a drunken little more eager begins to make scandal and galloping near the cemetery. The oldest skeleton tells the youngest:
– Listen, you go and scare that jerk.

The skeleton goes and starts bu-hu-hu! Bu-hu-hu! The beetle is nothing. He returns the disappointed skeleton to the others and tells them that he has not succeeded. The old skeleton gives him a cigarette, tells him to ask for a fire, and when he sees his face, he will be scared.

Said and done: the younger skeleton does exactly the same thing: he goes, he asks for a fire, the drunkard gives him, and full of grief, he tells the skeleton:
-My dad, if you see that it hurts you, why don’t you leave?

5 skeletons played in a poker cemetery when suddenly a belief came and galloped around the cemetery. The oldest skeleton says to the young man:

The young skeleton goes and starts with bu-hu-hu and other dubious noises, but the mockery is nothing. He returns extremely disappointed and tells them he has failed.

The old skeleton gives him a cigarette and tells him to ask for a fire because when the lighter light comes on, the drunkard will be scared.

Said and done. The young skeleton goes, he asks for a fire, the ridicule gives him and full of anger, the drunkard tells the skeleton:

– My son, if you see that your cigarettes are bad, why do you smoke?

Two brothers with skeleton speak the first bro:
Hey, get up and do some exercise, you’re so strong that you weigh a ton!
Second bro: A skeleton 🙂

Q: What did the skeleton say when he proposed to his friend?
A: Will you tame me?

I cooked eggs the next day. It was fascinating. However, I was Exagering, but if you think it wasn’t fun for you, then your heavy boil is for begging today, so I said before more cats start to fight, that she was a catastrophe. These kittens were all like, “You have to be MY GOD.” While in the ocean, they waved, MY, what did I do there? 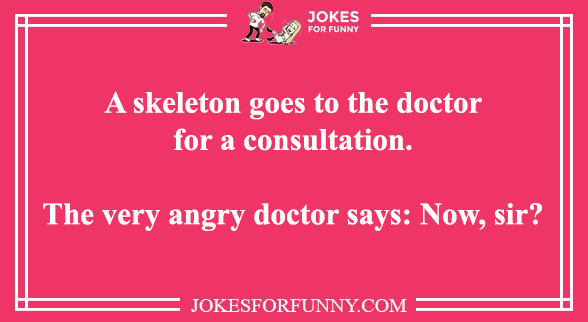 You MUST not have done it? Oh well, that’s fine. I guess these ocean passengers are too DEEP for you. Not? OK… but, you know why the skeleton was alone, right? Oh, because he had nobody. Why didn’t the skeleton ask for his face? He didn’t have the lid. What did his skeleton do to his GF? BNED it. Not? OK. Didn’t they make you laugh? Maybe I should hit your funny bone puns. 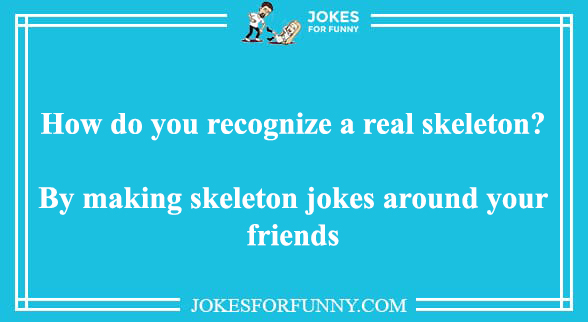 Funny skeleton jokes to say to your friends.