Interview with a coach after a 10-0 defeat:

Reporter: How do you comment on this devastating defeat?

Coach: What a devastating defeat? Our team did not lose the position in the standings after this match, so it is good.

Reporter: Well, you couldn’t lose the standings because you are in the last place. What do you think supporters will have?

Coach: I don’t know what supporter you’re talking about because I didn’t see anyone in the stands.

Reporter: Your team is in relegation and has no support. How do you think you will get back?

Coach: I came back from last night, but the guys don’t seem to. All the defenders told me they had drinks, and the rest of the team think it was still a bit high from you know what: D.

Reporter: How is that possible ?! Do you fight team and supporters?

Coach: The only thing I would have beaten this season would have been the drink we get from the sponsor if I hadn’t drunk. Now that I have cleared everything, I was expecting a bottle of beverage in the fridge.

Going for a walk in a sports field it’s the best thing I did for my fitness.

What’s the difference between rugby and politics? In rugby, you’re out if you’re caught stealing.

Did you hear they don’t do the “The Wave” at all sports events? Too many people don’t want to stay on their chairs.

Why was Michaela banned from sports? Because she knows to play

Why do football players do so well in bed? Because they know numbers

If procrastination was an Olympic sport, It was a great competition.

Refusing to go to the sport counts as new training, right?

Why is Super Bools more popular than the final? Because they run great ads

Why was the baseball player a bad sport? Because it not funny 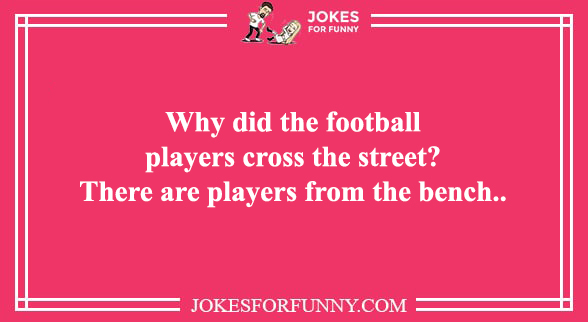 Why can’t you play a sports game in the forest? Because there are many animals.

My sport opponent was not happy with the goals. He kept returning it.

Where did the sportive keep their balls? In their pants.

If a sports man reads this fat jokes, he will laugh right now!

Tennis would be more interesting if women don’t wear skirts.

I am a professional sportive at watching women on the street

Why did the football players cross the street? There are players from the bench.

I wore two pairs of pants when I was jogging. My friends ask me why I do, and I respond that I need two paints because I need to change after a run. 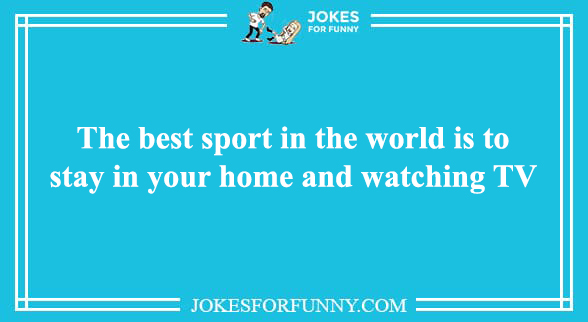 Do you think that triathlon it’s easy? Just try this sport and you will start to cry.

Dad, Dad, what’s going on with a footballer who doesn’t look good anymore?

My dear child, when the footballer does not see well, he becomes a referee.

Cristiano Ronaldo: God sent me to earth to learn the world of football and show them what I can do!

Messi: I didn’t send anyone for that. 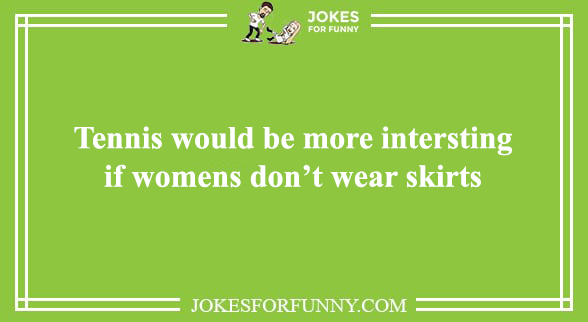 During an event, a boxer entered the ring a bit dizzy and after only a few seconds, immediately received a shot that sent him to the floor immediately, after which he tried to get up, but the coach shouted at him: