When a Canadian opens the door of your partner’s car, then you are sure that one of the two is new!

How a Canadian tell jokes?

My friend, let me tell you funny jokes: it was once in a while…

During the economic crisis, one of the most popular jokes with Canadians circulates:
The pessimistic novel: – Worse than that you can’t.
The optimistic Canadian: – You can, don’t be negative!

Near the US-Canada border, the customs officer enters a train compartment and asks anxiously:
– Weapons? Drugs? Money?
– No, thank you, says the Canadian. Just an orange juice, if you can.

At a meeting with a Canadian and a french, they make jokes.

The French people to Canadian:

Why Canadian can speak the french language? 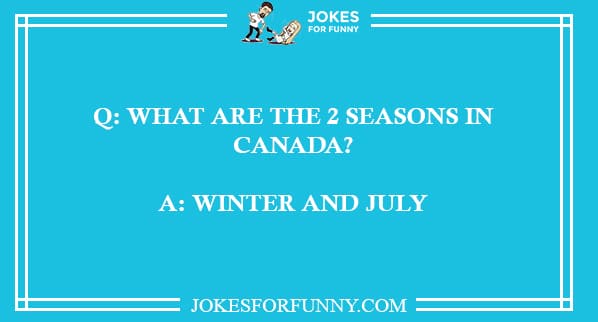 At a gathering of scientists from around the world, Canadians announce:
– Without joking with Canadians, we are the strongest, we have discovered something that allows you to see through the wall.
– Extraordinary? And what did you call the invention?
– The window.

Q: Why are Canadian men with BMWs most successful at women?
A: It’s simple, they understand Be My Wife!

A young Canadian goes nervously to the pharmacy where he had bought condoms the night before and tells the pharmacist:
– Excuse me, but the condom you sold me was defective. It broke as soon as I put it on!
An old man in a row completes it:
– Yes, mine did, too! 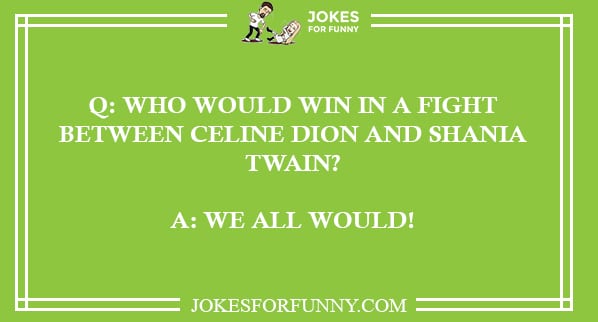 What nation are you?

A Canadian goes with the fish to the vet.
-Doctor, I think my fish suffer from epilepsy.
Surprised, the doctor asks:
-How did you come to this conclusion? Sounds pretty ok.
-You have patience doctor, I have not yet removed it from the aquarium.

Are you a fan of Canadians? Great! Find also italian jokes, about pasta, pizza and others.

A tourist arrives by car on the banks of a river and asks a man I have the law, from the Canadian Riding Police, who was in the area if the water is deep. Calm, as in the best Canadian jokes, he says no. The driver thanks them and enters the car in the river.

He starts to sink, then he barely gets out of the car and starts yelling at the cop: “Man, are those Canadian jokes really real, are you crazy? You told me that the water is not deep, and look at what it was like to drown me. ” With the same Canadian calm, the policeman replies: “I swear, sir, 5 minutes ago there was little water, some rates passed on it and they barely reached their water!” 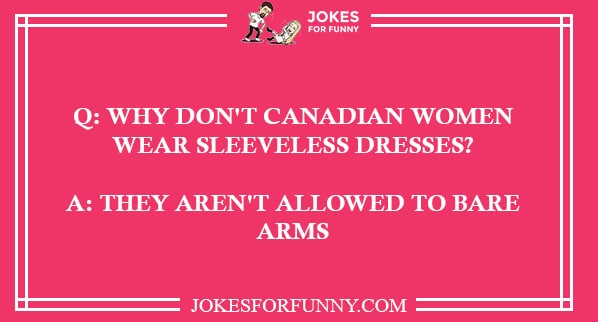 A Canadian, who liked cars very much, sees in a car showroom the latest Ferrari model. Desperate to have it, he sells everything he has, borrows from the bank, borrows from relatives and raises money, less than a dollar. With a heart like a flea, he goes to his neighbor, a Scot from father to son:

– Neighbor, I have a big demand for you. And lend me a dollar because I want to get a new Ferrari, the last guy.
Happy, the Scot takes out his wallet and tells him:
-Please 2 and get me a red one!

Scotians are among those who have a “special” treatment when it comes to banks. However, no other nation is exempt from being laughed at, and among them, the most successful Canadian jokes stand.

Even though there are not many Canadian jokes at first glance, they exist and are highly appreciated by connoisseurs. For those who have not heard in their lives of Canadian jokes, we offer a selection of those who seemed the most successful.