How do you recognize a Chinese?

Looking at his eyes

Why Chinese have eyes different than others?

Because they always look from far to close.

A Chinese tell a joke to his friend.

Give some soy sauce for my french fries. 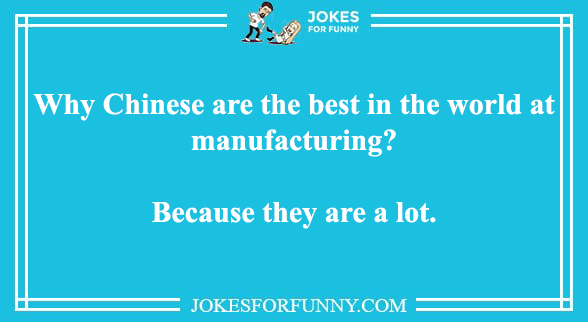 A black, an white and a Chinese journey by train

The black man shows a big pumpkin and the Chinese and white stare at his pumpkin.

The white man shows big celery from his bag, and the others stare at his vegetable.

Chinese men joke with them and show a big melon and say it’sits a pea.

A group of Chinese meet in a restaurant in Paris. What do they order?

What is most proteic food?

How a Chinese react when you say if they can do something?

Can you give me a Chinese copy of your work?

Yes, if you want to replicate 10x cheaper.

Why Chinese are the best in the world in manufacturing?

Because they are a lot.

Do you know more Chinese jokes? Tell us your story in the mail. 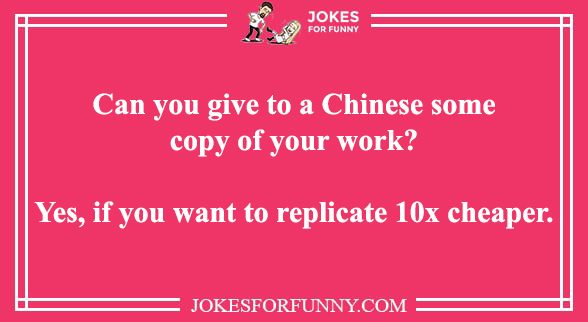 Not to take a separate picture for each one, he took a single picture in 20 copies.

Everyone was pleased, only one Chinese returned angrily.

“”This is not my picture,”” says the Chinese.

– Why did you give the first child a Chinese name?

It was concluded that expression:

“All men are the same” was invented by a Chinese woman who lost her husband in the crowd!

Chinese and French have similar in common. Read french jokes to find what.

Why in Chine? Why still have communism?

Because they are common Chinese.

An American doctor goes to China for a congress of doctors discussing birth control.

They all gather around the Chinese doctor to find out how they solved their birth problem.

– My dear medical colleagues from all over the world. In China, when a man comes to a consulate, we ask him to put his testicles on the table. I keep them well, take a hammer, and try my best to have an effect.

All doctors were scared of this painful method.

A more courageous doctor asks with half a voice:

The calm doctor responds: – Only if I make a mistake with the hammer in my finger.

Q: How did the Chinese break the Nasa?

A: They tried every word in the world.

A good man at the doctor with his child says:

– Doctor, my child is almost two years old and hasn’t opened his eyes yet.

– The Lord thinks the problem is not with the child but with you. You have to open your eyes because the child is Chinese. 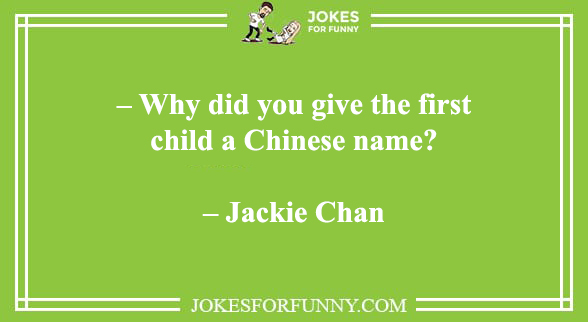 – Why did you give your little baby a Chinese name?

My wife read that one of 5 children in the world is Chinese, which is why I gave her Chinese names.

On a US Navy ship was a Chinese chef. Poor and weak, this was the target of bad crew jokes, which, however bad it was, never got angry.

One evening, a few months later, the crew decided it was time to finish with bad jokes, which is why they called on him to notify him:

– Look, since you’ve been on the boat, I made you all sorts of jokes and you’re not upset at all. Today we promise you that we will never make you a bad joke.